The number of treads, that constitute a charge, depends upon the width of the treads and the depth of the leaves of the leaf truck, and is selected by the operator. Following attached are further conveyors / cross transfers for buffering complete tread charges.

Auto booking of the leaf trucks

Immediately after reaching the end position, the belt tray begins to retract while its belts are running forward with exactly the same speed of the retracting belt tray. Thus the tread batch is kept stationary in relation to the leaf, resulting in its precise positioning on the leaf.

The advantage of the belt tray is that the treads always lie on the belts under their own weight, and the surface can be finely structured as well as freshly cemented, as it is not touched. 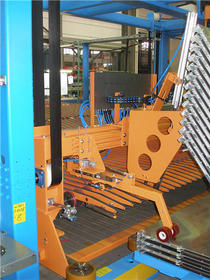