More performance thanks to intelligent sorting

PUBLICATION OF HK 03/2017: Today, part variation is one of the dominant topics in the furniture industry. The customer’s requirement to make distinctions and deliver faster are representing a challenge for the manufacturer’s internal logistics. This is because product components cannot be routinely managed between the individual processing steps due to their diversity. Sorting systems like the ones from SYSTRAPLAN are the key for optimum production processes. 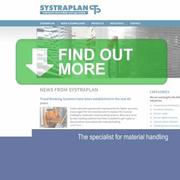 Considering the diversity of parts it is not easy to maintain an overview of the production cycle. For individuals who have seen quite a number of stacks in a furniture production you will know each part differs in an advanced production. Even equivalent parts are treated individually – this is what the system wants in lot size 1. Who knows what is what? How can these part movement processes be organized in a transparent manner?

Such specifications in general require the use of sorting systems. These systems are able to take up the furniture parts in any order; after a processing step,  temporarily store and thereafter return the parts in a different sequence. That way new optimized sequences are built, a significantly higher performance is achieved, as a consequence less tool changing, less glue changing or less changing of panels with different thickness is needed.

Proven experts for this kind of technology are to be found at SYSTRAPLAN, located in Herford, East Westfalia. In the year 2000, SYSTRAPLAN built a sorting system for work tops. In line with the expectations this technique later became part of the production lines. Increased part  variation and high production output requirements are achieved with sorting solutions for interlinked production lines.

During the planning stage client system rquirements are derived. This includes, in particular, size, diversity of parts, capacity needed, performance and performance
peaks. On this basis, the decisions about the concept are then taken. 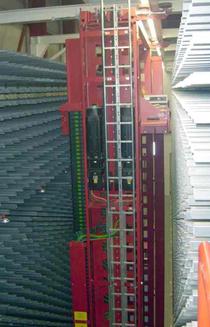 SYSTRAPLAN compact sorting systems are used for average-sized storage capacities but where high performance is required at the same time to store and remove parts.
They possess a high cycle output because there is no axle in longitudinal direction. The ability to lift several parts with one stroke movement provides an additional performance-enhancing effect. The canti-lever rack is matched to the dimensions of the furniture parts. Consequently, there is minimal spacing between the racking levels because parts are stored in a row and thus a high packing density is achieved.

When greater storage space is required and the number of parts that need to be handled is low to medium, sorting systems by SYSTRAPLAN are the right choice. The rack serve carrier is moving in an aisle, equipped with a specific load suspension and operating as sorter. The high storage capacitiy is achieved by the length of the cantilever rack. As previously mentioned, the parts are stacked for high packing density. Both systems – compact sorting system and sorting warehouse – are designed with flexibility to adapt optimally to the respective requirements.

Meanwhile, the flexibility of SYSTRAPLAN sorting solutions extend beyond the furntiure industry. They have been used extensively in metal processing and even have been implemented for window and façade profiles or awning profiles. But what is not apparent at first sight is the sophistication of data technology behind the whole material flow. Which part comes from where? Where is it meant to go? When should it go there? Where is it now?
An intelligent system tracks the flow of the parts – nothing gets lost. The system knows each single part, where it is currently located and where it should go. For relocating and removing parts from stock highly intelligent algorithms provide  optimized material flow to meet the different requirements of the following processing steps.

It’s also important to consider the necessity to integrate the whole system into the customer’s IT-infrastructure and organization. For the software planner this task is quite like the work of an architect. Altogether, all systems must build an optimal and efficiently working system. For many entrepreneurs considering sorting or storage solutions sceptism begins here due to an unwillingness to allow third parties access to replace an excisting, maybe reliable running system with a new unkown one.

Based upon a number of succesfully implemented projects in the past, it is worth the effort. Undoubtedly, machines were able to achieve high individual outputs but lacked the ability of linked systems due to peaks in the production flow of parts that could not be worked off by the machines. In addition, there were also unproductive waiting times. The right sorting system helps to equalize single processing steps and thus leads to a higher performance of interlinked processing lines.